Scoliosis is a common spinal condition affecting over 3 million people in the United States per year. In fact, approximately 2% – 3% of Americans aged 16 have it. Defined as a sideways curvature in the normally straight vertical path of the spine, scoliosis oftentimes surfaces during the rapid growth spurt just before puberty. Females tend to have a higher risk of developing this condition than males.

There are four primary types of scoliosis, including:

• Neuromuscular
Resulting from reduced muscle or nerve function, this form of scoliosis is usually seen in those with cerebral palsy, spina bifida or other conditions that are accompanied by paralysis. Neuromuscular scoliosis is also commonly referred to as myopathic scoliosis.

• Degenerative
Degenerative scoliosis typically spurs from the thinning of the bones, caused by aging and general wear and tear. Unexpected injury or trauma can also cause this type of scoliosis. Usually occurring later in life, it is one of the few types of scoliosis that healthy patients may first begin to experience in adulthood.

• Congenital
If a patient is born with a bone abnormality and they develop scoliosis as a result, their condition is considered congenital scoliosis. This ailment develops in the uterus and can be recognized during a child’s infancy. Congenital scoliosis is very rare, affecting only one in 10,000 children. However, those who suffer from this complication generally require corrective surgery.

The severity of scoliosis depends upon the shape, location and direction of the intrusive curve. Lateral arcs are generally described as “S-shaped” curves or “C-shaped” curves, as they resemble the deviations of these letters.

Other common terms used to indicate the details of a specific curvature include:

• Dextroscoliosis
The most frequently occurring type of spinal curve, dextroscoliosis develops when the spine bends toward the right. This usually happens in the thoracic (middle back) area of the spine and may be isolated (forming a “C-shape) or be accompanied by another curve moving in the opposite direction in the lower spine (creating an “S-shape).

• Levoscoliosis
A spinal curve to the left, levoscoliosis usually surfaces in the lumbar (lower back) region of the spine. However, when levoscoliosis does occur in the thoracic spine, it may indicate a spinal cord tumor. For this reason, it is important to diagnose levoscoliosis quickly.

If you discover a spinal curvature, it is important to speak with a licensed spine professional to determine the root cause. Many factors can be easily managed, but others can be dangerous and require timely medical attention.

By analyzing the spinal curve and performing non-invasive tests when necessary, spine specialists can typically determine the underlying cause and then build a treatment plan best suited for each unique case.

Because scoliosis can occur gradually and may not be accompanied by any immediate pain, it can be difficult to spot. However, addressing it promptly can increase your chance of obtaining effective treatment and retaining your quality of life.

Look out for these symptoms:

• When viewed from the back, the spine appears curved

• One shoulder appears higher than the other

• One shoulder blade protrudes more than the other

• One hip appears higher or more prominent than the other

• The waist appears unevenDull or sharp back pain is experienced

• One leg appears shorter than the other

• The body tilts to one side 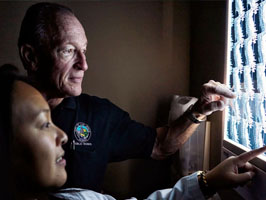